The Smithy is a local studio to us that is steeped in rock history, being the choice of recording venue for many Midlands rock icons. We particularly love the big open sound of the live room which has a decent high ceiling. 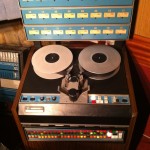 We wanted to balance vintage vibe with modern recording sensibilities so the tracking process combined a standard Pro Tools 192 rig with a classic 3M M79 2″ 24 track tape recorder. The M79 is a rare beast and is famously temperamental so we had the machine completely overhauled by renowned engineer Clive Kavan.

At the sharp end of the recording chain were the drums. The kit used was a classic Ludwig 13″, 16″, 22″ shells with Ambassador and Pinstripe heads. The snare drum was a vintage Ludwig Supraphonic 402 – exactly the same as John Bonham used on the majority of Led Zeppelin tracks. Cymbals were a mixture of Paiste (a Bonzo favourite) and Zildjian. 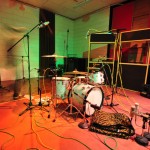 The drums miked up

We decided to offer two distinctly contrasting miking and mix options for the loops. We combined two mic arrangements – a standard spaced overhead and spot mic arrangement with a very vibey ‘Glyn Johns’ arrangement. The latter set-up utilises a single over-head mic, a side mic and a spot mic for the kick drum (and sometimes the snare). This technique, pioneered in London studios in the 60’s, was used extensively by producer Glyn Johns on countless drum tracks from Bonzo to Charlie Watts. We went for Beyer m160 ribbon mics for the top and side of the kit which give a very smooth top end to the cymbals and contrast nicely with the Neumann U87s used as overheads for the modern mix. On the Kick we compared an Electrovoice RE20 and a Shure SM7. We went with the latter. We also used a Neumann U47 fet as a distance kick mic which ended up capturing the over-all front of the kit nicely. For the modern spot mics we chose a brace of Audix (i5, D2, D4) for their smoothness and finished off with an AKG 451 on the hats and a pair of AKG 414s spaced high up behind the kit for a big room sound. 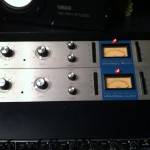 The processing was kept to a minimum. We managed to get hold of a rare vintage Helios Pre-amp / EQ module (originally from the Rolling Stones mobile truck). This unit was used on two Zeppelin albums amongst others and was favoured for it’s musical EQ. We also used (at the mix stage) some vintage Urei 1176 compressors (silver and black face) in ‘nuke’ setting. This was blended into the modern mix to create a huge sounding kit. We also used Focusrite Red 1 and the fabulous Audient ASP008 channels for the modern mix. Both of these have masses of headroom and are a lot less coloured than the Helios.